You are here: Home » About the Chenequa Police Dept. » History 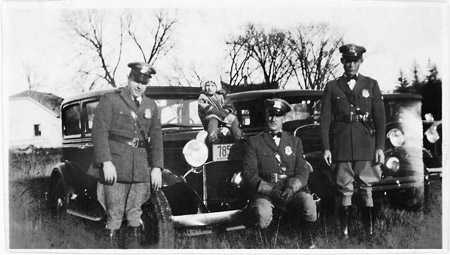 First Police Chief, Chester Miller, daughter Ramona, and other officers of the time.

The history of the Chenequa Police Department is directly tied to the establishment of the Village of Chenequa. Here is an excerpt from former local resident, historian and writer, William F. Stark. He has written three books. For more information about the books, please visit the history page on the Village website.

After World War I, better roads were built in the Milwaukee area. This fact, coupled with the increase in popularity of the automobile meant that the lakes of Waukesha County, which a few years earlier were impractical to visit on a Sunday outing, now became accessible as a recreational area for thousands of Miwaukeeans.

It was with increasing alarm that Pine Lakers viewed the way in which the neighboring lakes were being exploited. Dance halls, taverns, and public buildings of all descriptions were beginning to clutter the shores.

While a number of Pine Lake residents were concerned with what was happening, it was Robert E. Friend who almost alone performed a herculean task to protect the Pine Lake shoreline. In the summer of 1921, Friend, who was born at Pine Lake thirty-seven years before, personally called on property owner after property owner, requesting that they put certain restrictions on their land.

That hot summer, Friend convinced over ninety percent of the Pine Lake owners to file agreements with the County which put restrictive clauses in their deeds. Among the restrictions, all of which were to remain in effect for ninety-nine years, was the stipulation that the land was to be used only for private homes or for farming purposes.

While the restrictions did much to prevent the commercialization of the lake, there were phases of community life that remained neglected. The most glaring example was the lack of either police or fire protection. During the winter months, empty homes were ransacked, and in the case of fire it was necessary to rely on neighboring villages for help.

Motivated in part by these facts, a petition to incorporate the Pine Lake area into the Village of Chenequa was filed with the Circuit Court of Waukesha County.

An election was held at the Chenequa Country Club on March 10, 1928, and the residents of the Village voted 189 to 14 to incorporate. Later, the village officers were elected, and J. V. Quarles became the first president.

Chenequa’s government, while simple, is effective…All new legislation is voted on by this panel [Village Board]…

Immediately after the incorporation, a Chief of Police and a Patrolman were hired as well as a Village Forester…

In 1932, four years after Chenequa became incorporated, the internationally known landscape architect, the late Jens Jensen, who founded the Clearing on Door County, was retained by the Village. In an exceedingly interesting twenty-seven page report, Jensen recommended not only what should be planted along the Village roads, but even had a section in his resume entitled: “The Village Green,” “Business Center” and “Airport.”